Physicists have precisely measured the ultra-rapid change of a magnetic state in materials by observing the emission of terahertz (THz) radiation that accompanies such a change in magnetization. An international research team consisting of scientists from Bielefeld University, Uppsala University, Strasbourg University, Shanghai University for Science and Technology, Max Planck Institute for polymer research, ETH Zürich and the Free University of Berlin developed and tested the ultrafast magnetometry method.

This work could pave the way for spintronics research and technologies based on purely acoustic and, if possible, heatless and ultrafast magnetism control.

The magnetic state of a material and its dynamics are of fundamental interest for research, and are also at the heart of several technologies. However, reliable access to magnetization dynamics in materials and devices at the ultrafast timescale and under realistic device operating conditions remains a challenge.

“The real challenge is to be able to detect such a change in magnetization quickly and with enough sensitivity,” said Professor Dmitry Turchinovich from the University of Bielefeld, who led the research. “Our idea was to use the basic principle of electrodynamics.”

Together with their international colleagues, Professor Dmitry Turchinovich (left) and researcher Wentao Zhang (right) demonstrate how the ultra-rapid change of magnetic states can be measured. Courtesy of University of Bielefeld/MD Müller.

This principle stipulates that a modification of the magnetization of a material must result in an emission of electromagnetic radiation which will contain complete information on this modification. If the magnetization of a material changes on a picosecond time scale, the radiation emitted will belong to the THz frequency range. This radiation, known as magnetic dipole emission, is weak and can be easily obscured by light emission from elsewhere.

According to Bielefeld researcher Wentao Zhang, the team was able to isolate the precise magnetic dipole THz emission that was needed to reliably reconstruct the ultrafast magnetization dynamics in the encapsulated iron nanofilms, which the team used for their experiment. . 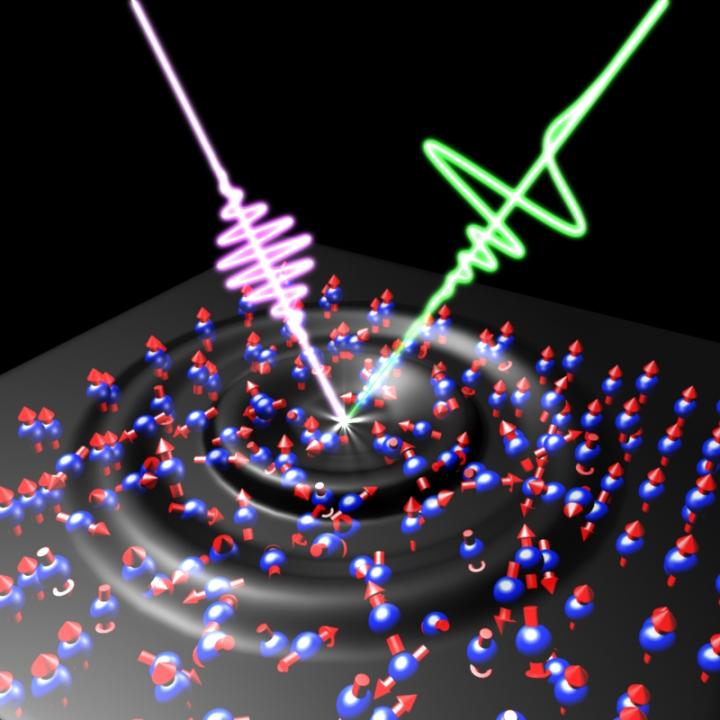 The researchers were able to measure the magnetization dynamics in the iron nanofilm caused by ultrafast electronic and acoustic processes. Courtesy of University of Bielefeld/W. Zhang.

The researchers sent very short pulses of laser light onto the iron nanofilms, causing them to demagnetize very quickly. They simultaneously collected the THz light that was emitted during the degaussing process. An analysis of this THz emission gave the precise time evolution of a magnetic state in the iron film.

“It has been known for some time that iron can demagnetize very quickly when illuminated with laser light,” Turchinovich said. “But what we also saw was a reasonably small, but very clear, additional signal in the magnetization dynamics.

“This signal came from demagnetization in the iron – actually driven by the propagation of a very fast sound pulse through our sample.

“Where does this sound come from? Very easy: When the iron film absorbed the laser light, it not only demagnetized, but also became hot. As we know, most materials expand when they get hot – and this expansion of the iron nanofilm launched a terahertz ultrasound pulse into the structure of our sample.

“This sound impulse bounced between the sample boundaries, internal and external, like the echo between the walls of a large hall. And each time that echo passed through the iron nanofilm, the pressure of the sound moved the iron atoms around a bit, further weakening the magnetism in the material. This effect has never been observed before on such an ultra-fast timescale, the researchers said.

Uppsala University professor Peter Oppeneer, who led the theoretical part of the study, said the researchers could clearly see the acoustically-driven superfast magnetization signal and that it was relatively strong. “It was amazing that detection with THz radiation, which has a wavelength of less than 1 mm, worked so well, because the expansion in the iron film is only a few tens of femtometers, or 10 orders of magnitude smaller,” he said.

Researcher Pablo Maldonado of Uppsala University, who performed the numerical calculations that delineated the researchers’ observations, said: “What I find extremely exciting is an almost perfect match between the experimental data and our basic theoretical calculations. This confirms that our experimental ultrafast terahertz magnetometry method is indeed very accurate and also sufficiently sensitive, as we were able to clearly distinguish ultrafast magnetic signals of different origins: electronic and acoustic.

The co-authors of this publication dedicated it to the memory of their colleague and pioneer in the field of ultrafast magnetism, Eric Beaurepaire of the University of Strasbourg. He was one of the initiators of this study, but died during its final phase.