SOUTH PITTSBURG, Tennessee — A company calling itself America’s oldest producer of cast iron cookware has launched a new museum that tells the story of the industry and one of the region’s oldest companies.

“There are so many people who want to know how it’s done,” said Mike Otterman, chief executive and president of Lodge Cast Iron, during a preview of the museum this week.

He said officials believe the museum will attract 200,000 visitors a year through it and the existing factory outlet it is connected to.

Otterman said the 10,000 square foot museum is near where Lodge’s foundries produce its iconic stoves and other products that are sold nationally and in more than 70 countries around the world. .

He said in an interview that the museum, which will hold its grand opening on Saturday, traces the history of the 126-year-old family business which employs around 600 people.

Additionally, the museum examines the so-called cast iron culture in which the products are used by barbecue cooks as well as celebrity chefs, said Otterman, who is the company’s first non-family CEO.

A key attraction at the museum, which costs $10 per person, is what Lodge calls the world’s largest cast iron skillet. The huge piece is over 18 feet tall and weighs 14,360 pounds, according to Lodge.

Lodge vice president of marketing Susanne Champ said a new restaurant, Big Bad Breakfast, one of a chain of restaurants that focuses on Southern favorites, will soon open in an adjacent space.

“They’re talking about another one in Chattanooga,” she said in an interview.

Lodge officials said the museum has been under discussion for a long time.

Otterman said South Pittsburg annually hosts the National Cornbread Festival, which draws throngs of people interested in Lodge products and how they are made. The museum is a place where people can learn year-round about a process that has been going on for about 2,000 years as well as the business, he said.

Walker Henley, Lodge’s brand development director, said part of the concept behind the museum is to show people what goes on in the foundries.

“We have gone from a regional manufacturer to a global brand,” he said during a tour of the museum.

The company was founded in 1896 by Joseph Lodge. It all started as The Blacklock Foundry, named after the founder’s minister. This foundry burned down in May 1910, according to the company.

Three months later, the foundry was rebuilt under the manufacturing name Lodge.

Staff photo by Mike Pare / Mike Otterman, center, Managing Director of Lodge Cast Iron, listens during a preview of the opening of the company museum on Monday, October 3, 2022. At right is Walker Henley, Manager of the company’s brand development, which led a tour through the new museum.

According to the company, the Lodge family found ways to keep doors open during the depths of the Great Depression of the 1930s. For example, novelty items such as cast iron garden gnomes and animals were produced and sold to keep workers employed.

After World War II, in order to meet growing business demand, the manufacturer began converting its foundry from a manual casting operation to an automated molding process. Over the years, the company has implemented processes leading to safer and more efficient manufacturing, according to Lodge’s story.

Lodge updated its foundry in 1994 with the replacement of coal-fired cupolas with an electromagnetic induction melting system. In 2002, the company began seasoning every piece of cast iron cookware, in what it calls an industry first that has since become standard.

Otterman said Lodge has seen revenue growth for 20 straight years, though he declined to reveal a revenue figure.

He said the coronavirus pandemic had boosted business as people stayed home and cooked.

“It taught a whole new generation to cook,” Otterman said. 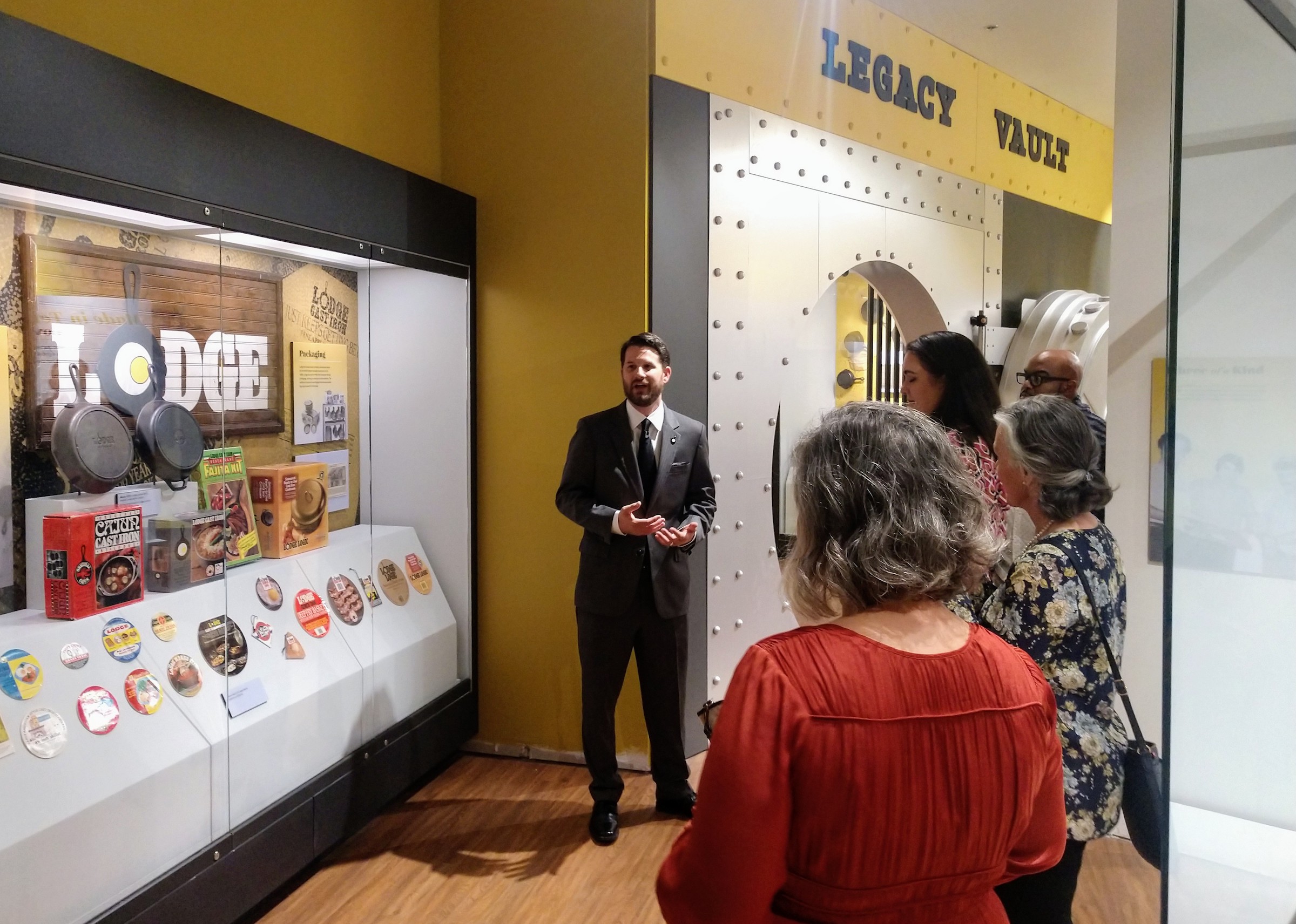 Staff photo of Mike Pare/Walker Henley, left, Lodge Cast Iron brand development manager, shows one of the exhibits at the company’s new museum in South Pittsburg, Tennessee, Monday, Oct. 3, 2022. The 10,000 square- foot museum is due to open on Saturday.